For many years, the JAC Party has been exposing wrongdoing in the Portsmouth area, exposing the improper conduct of the ex-Liberal Democrat MP, Michael Hancock.

Following our expose, published in 2010 and available here, an independent investigation into Mike Hancock's conduct was undertaken by Nigel Pascoe QC.
December 2019

Statement about Steven George, the brave lady known as Annie and the disclosure of the unredacted Pascoe Report about the sexual misconduct of former MP, Mike Hancock.

The JAC party is making this statement so that readers can begin to know the truth of what really happened to a brave victim of the sexual misconduct of Mike Hancock, the former MP for Portsmouth South, and to two of the many whistle-blowers who have tried to help her get justice.

Steven George is the JAC Party candidate for the Portsmouth South constituency in this General Election. Last Friday 6 December 2019 the Portsmouth News published Candidate profiles for the other 4 candidates.  The newspaper did not publish a profile for Steven George.  Their local democracy reporter says that she emailed and telephoned Steven asking him to answer her questions but there is no record on his PC or his telephone that she did so.  Instead, despite being asked not to, the Portsmouth News published an article referring to the conviction of Jason Packer knowing full well that this was a gross miscarriage of justice caused by a police officer planting material on his computer.  A summary of the evidence for this is set out below.

Steven George was formerly known as Alizon Pink and is transgender.  She was born on 29 February 1952 and was adopted by Bonner Pink and his wife when she was 3 months old.  At that time Bonner Pink was a Portsmouth City Councillor becoming Lord Mayor of Portsmouth from 1961 - 1962 and the MP for Portsmouth South from 1966 until he died in 1984.  He was preceded as MP for Portsmouth South by his friend Sir Jocelyn Lucas who had been MP since 1939. Prior to his election Sir Jocelyn had been the Portsmouth District Officer for Sir Oswald Moseley’s British Union of Fascists.
Bonner Pink was succeeded as MP for Portsmouth South by Mike Hancock with whom he was also friendly.  He described Freddie Emery-Wallis as his best friend.  Mr Emery-Wallis was also Lord Mayor of Portsmouth and was Leader of Hampshire County Council from 1976-1993, and again from 1997-1999.  Mike Hancock was Leader of Hampshire County Council from 1993 - 1997, when he was again elected as the MP for Portsmouth South, remaining so until losing his seat in the General Election in 2015.

When she was a young child, Alizon Pink was sexually assaulted by Sir Jocelyn Lucas, Cllr Emery-Wallis, Bonner Pink and Mrs Pink.  She was also raped as a child.  When she was 14 years old she was placed in Knowle mental hospital by her father.  In April 1968, when she was 16 years old, her father, by then MP for Portsmouth South, arranged for her to be transferred to Broadmoor.  In 1970 or 1971 she was sexually assaulted by Jimmy Savile in Broadmoor.  She was the only victim of Jimmy Savile in Broadmoor who waived her right to anonymity.

In late 1989 Alizon Pink was discharged from the mental hospital she should never have been in from the outset.  Very early in 1990 she reported to the police that she had been assaulted by Jimmy Savile.  The police took no action and Jimmy Savile was knighted later in the year.  In 2006 she started writing a book called Heartless about her experiences and published the book privately in 2008.  In 2001 Freddie Emery-Wallis had been convicted and imprisoned for historic child abuse.  After the publication of Heartless, Steven George, as he was then called, complained to the Hampshire police about his abuse by Cllr Emery-Wallis.  Again no action was taken, probably correctly, because of insufficient evidence after so many years.

In the summer of 2010 Steven heard about the complaints by “Annie” that she had been sexually assaulted by Mike Hancock, and determined to help her get justice.  When the police and Portsmouth City Council did not take action against Mike Hancock Annie started a civil action through the leading human rights lawyer, Harriet Wistrich.  In April 2013 Annie and the JAC Party both provided evidence of sexual misconduct by Mike Hancock to Nick Clegg, then Deputy Prime Minister and Leader of the Liberal Democrats. Mr Hancock then resigned the Liberal Democrat whip in parliament while he sought to clear his name in the civil proceedings.

In May 2013 Nigel Pascoe QC, possibly the most eminent barrister in the field of sexual abuse and mental health issues, was instructed by Portsmouth City Council to carry out an inquiry into the allegations by Annie.  Mr Pascoe produced his Report dated August 28th 2013 which was, and is, absolutely damning about Mr Hancock’s conduct.  The final sentence of Mr Pascoe’s Report reads “Note: For the avoidance of doubt, I consent to the full and unabridged publication of the Report”.

Despite this statement Portsmouth City Council did not even provide a copy of the Report to Annie or her solicitors.  Instead, in response to a subject access request, they provided only a redacted version of the Report, which covered up what we now know included the conclusions of Mr Pascoe that there was prima facie evidence that Mr Hancock had committed serious sexual misconduct.

Mr Hancock’s solicitors then took whatever steps they could to prevent public disclosure of the contents of the Report.  However somehow the redacted Report was released into the public domain, especially on the Guido Fawkes website.  The JAC Party do not know how this happened but are aware that copies were provided to both Labour and Conservative members of Portsmouth City Council.  A copy was also obtained by Steven George and his carer/companion, Mr Jason Packer.  On 18 January 2014 Jason Packer put a copy on a file-sharing website.

On 24 January 2014 Annie’s solicitors obtained a High Court Order that Portsmouth City Council must provide a copy of the unredacted copy of the Report to them by 31 January 2014.  Portsmouth City Council complied with this Order by sending the unredacted Report to Annie’s solicitors by email on 30 January 2014.  Faced with the disclosure of the contents of the unredacted Report in open court Mr Hancock was forced to make a public apology to Annie and settle the civil proceedings in June 2014.  However as part of the settlement Annie was asked to sign a non-disclosure agreement (NDA) which prevented her from pursuing a claim for sexual assault against Mike Hancock.

Someone was determined to “get back” at Steven and Jason Packer for putting the Pascoe Report on the file-sharing website.  On 11 February 2014, the same day as one of the High Court hearings, 5 police officers raided Steven’s home and searched for and seized any computers which had a copy of the Pascoe Report.  The police forensic report and the transcript of the eventual trial of Jason Packer in August/September 2015 show that what happened was as follows.

At the trial in 2015 the prosecution’s case was that there were 17 or 18 images and 5 films of child pornography downloaded onto the computer.  Jason Packer was convicted and eventually sentenced to one year’s imprisonment.  But later analysis of the forensic reports and the transcript of the trial show that all the images and the films were shown as downloaded in 2011 or 2012.  However the prosecution’s own forensic report showed that the computer was first set up on 1st June 2013. So the prosecution was contending that Jason Packer was downloading child pornography onto his computer before it even existed!

There was no report presented to the court of what had been done on the computer during the nine minutes when the police officer was working on it.  In any event the correct procedure on seizing computers which are suspected of holding illegal material is to turn OFF the computer if it is on, and take it away in a sealed bag for later forensic analysis.  In this case the policeman, who was said to be a Canadian police officer on secondment, did the exact opposite.

Furthermore In the period between conviction and sentencing Jason Packer researched the titles of the films and images which he had been told were on his computer.  He found that the films and images came from legal adult sites, in other words they were not images or films of actual children.  In fact the first of the 5 films which were shown to the jury was a horror movie, known as the Serbian Film, which could be, and was, purchased on Amazon a few days after the trial ended.
The only possible conclusion is that the conviction of Jason Packer was a cruel and malicious miscarriage of justice, engineered by the police officer who worked on the computer between 6:58 and 7:07 am on 11 February 2014, and the police officers, if any, who knew what that police officer was doing.

This is not only a gross injustice to Jason Packer; it is also a complete failure to provide justice for Annie.  It was in fact her Family Support Worker who first reported what Mike Hancock was alleged to have done to the Portsmouth Public Protection Unit.  The Family Support Worker should be congratulated for the exemplary way in which she tried to help Annie.  Annie was the brave lady who refused to submit to the threats and intimidation which she suffered when she pursued her complaint.  There should be a full and impartial investigation of what occurred and the JAC Party will ask the other candidates in the current election to support this.  All three of the Conservative, Liberal Democrat and Labour candidates are Leaders of their political groups on Portsmouth City Council and will either still be so or be the new MP for Portsmouth South after the election.

Annie will never get closure unless there is a proper investigation of what occurred and a prosecution of Mike Hancock for assaulting her.  She has provided the JAC Party with an email sent a few days ago to a news agency requesting help with this.  We attach a copy of this and wholeheartedly support Annie in her quest for justice.  Finally Mr Pascoe consented to the full and unabridged publication of his Report; Annie also believes that the unredacted Report should be published.  We therefore attach a copy with the passages which were redacted highlighted in yellow.  We hope that this will help people judge for themselves if more should be done to help Annie get closure and to put right the gross injustice done to Steven George and Jason Packer. 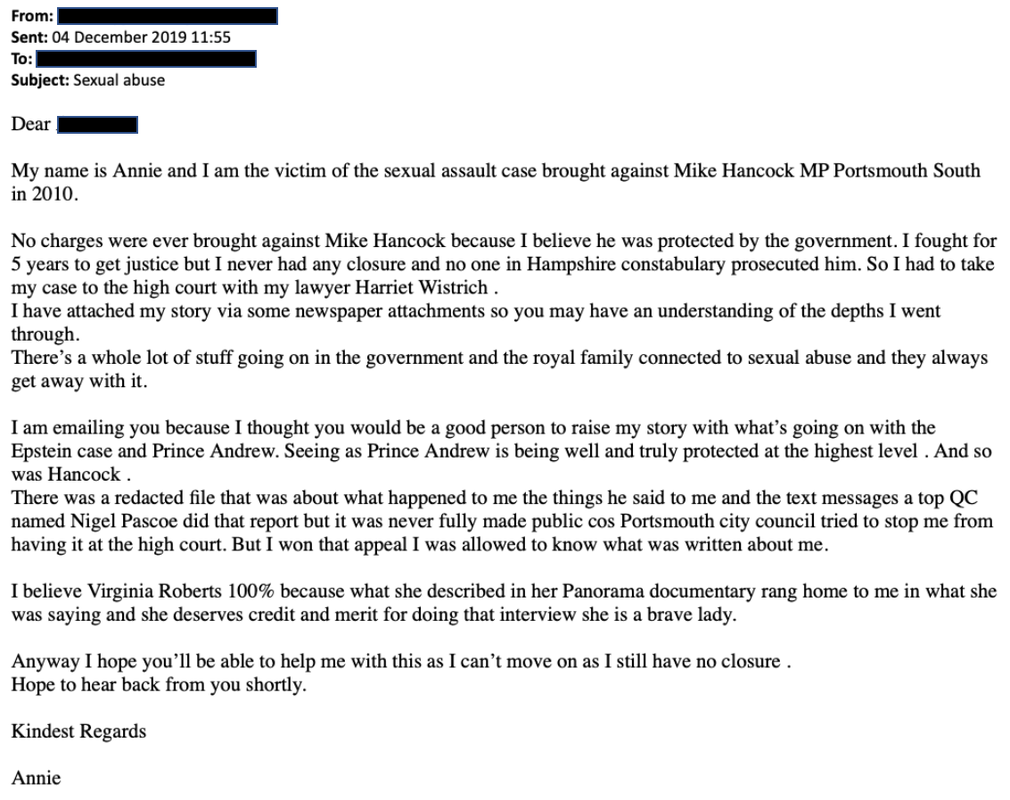 Links to press articles referenced in the email ​
The full unredacted Pascoe Report with previous redactions highlighted
August 2017
A documentary, following the original investigation and whistle-blowing of the Pascoe report, is being produced by Rostand Productions.  A trailer can be seen below :

The Whistleblowers from Rostand Productions on Vimeo.

When we get a reply from Mr Clegg we will add this to the website so that the public can judge for themselves how clean Mr Clean is...

You will need to have Adobe Acrobat Reader installed on your computer to view these documents.