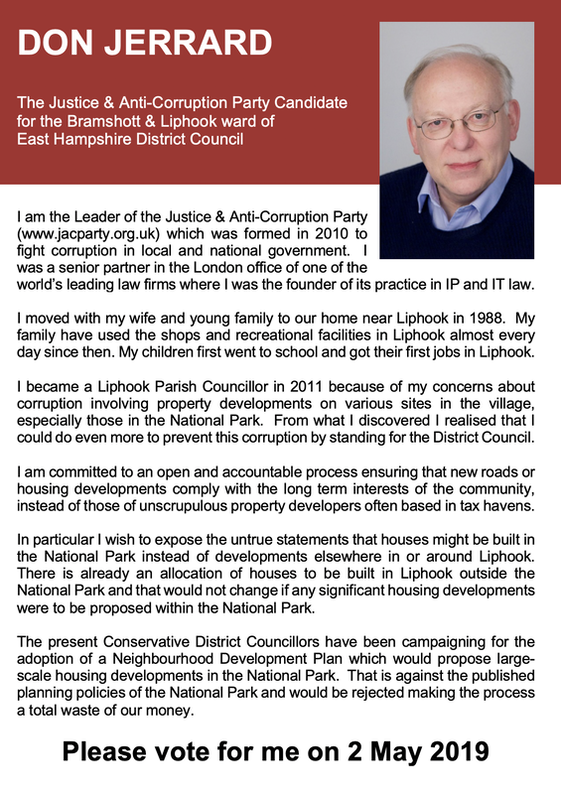 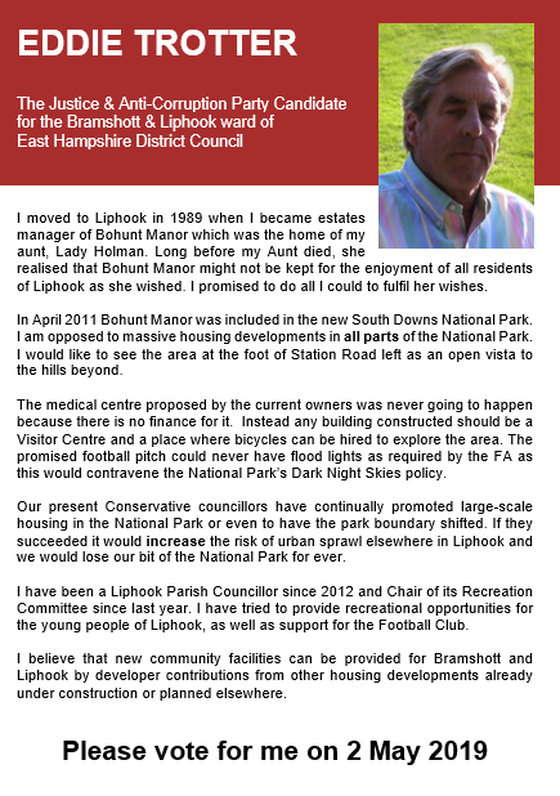 7 June 2017
Susan Jerrard is the JAC Party's candidate for East Hampshire.  Here is her letter, sent today, to residents of Liphook living near Bohunt Manor and her election leaflet :

Attached is my leaflet for the General Election on Thursday 8th June.

One of the proposed developments which causes me most alarm is the repeated applications to build hundreds of houses on Bohunt Manor and the Foley Estate, both of which are in the South Downs National Park.

Bohunt Manor was left to the World Wildlife Fund in the Wills of Sir Adrian and Lady Holman.  It was meant to be used as open space for the people of Liphook.  When Lady Holman died it was sold by the WWF for less than £2 million.  The land was then transferred to a company registered in the British Virgin Islands owned by a Lichtenstein Trust.  There is no public record of the beneficiaries of the Trust.  The British Virgin Islands is a popular tax haven.

Since the boundary of the South Downs National Park was extended to include Bohunt Manor and the Foley Estate there have been repeated proposals to build literally hundreds of houses on this land.  If these proposals ever succeed the profits will go to a tax haven.  Despite promises from all the major parties nothing has been done to stop this type of behaviour.

Please show your support for opposition to these development proposals by voting for me on Thursday.  Thank you. 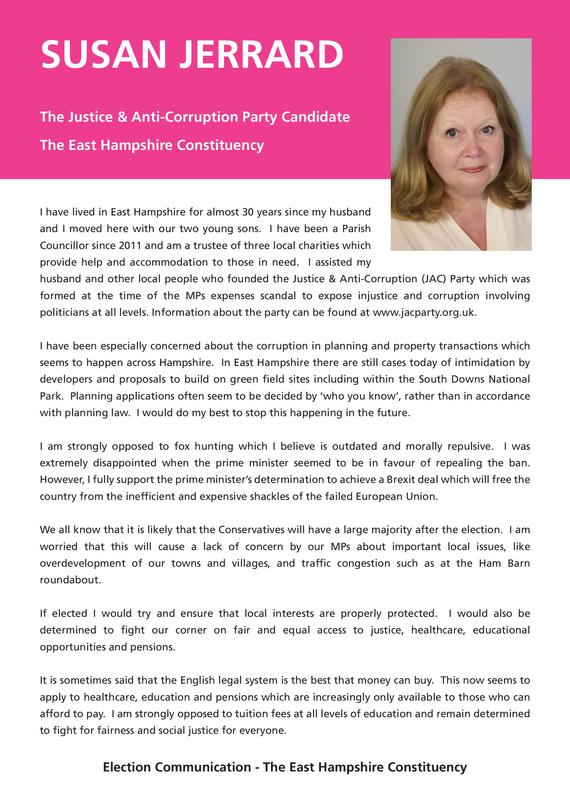 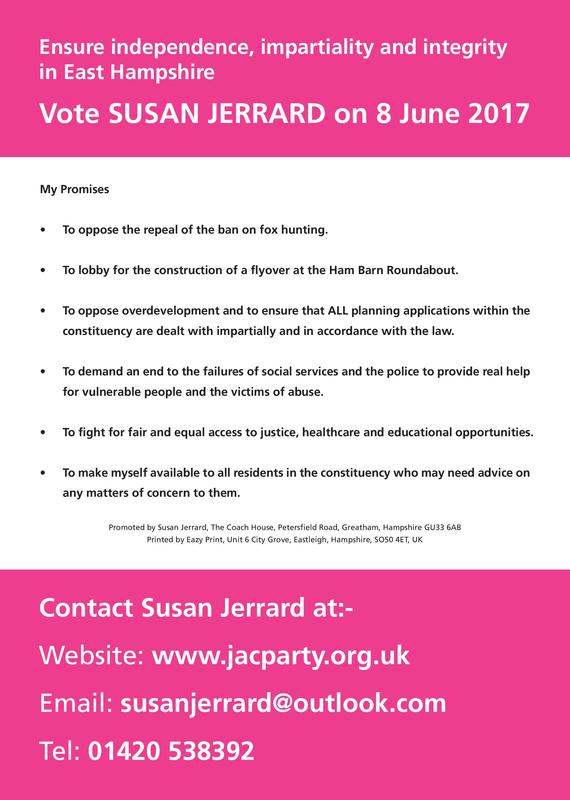 This is Susan's statement to the Petersfield Post when she was asked to comment on what could be done to prevent terrorist attacks like the one in Manchester.

I am a Parish Councillor and have lived in Greatham for nearly 30 years.  The JAC Party (www.jacparty.org.uk) was formed to expose corruption at all levels and help victims of abuse.

For 20 years the major parties have not recognised the dangers of uncontrolled immigration without integration.  This has caused the formation of terrorist cells in such numbers that the police do not have the resources to monitor them.
It is disturbing that Salman Abedi was reported to the police by his own community and was known to be involved with a terrorist network.  However the police took no action.  The JAC Party believes that this is partly because of misguided political correctness.

For 6 years I have attended CTCG (Community Tasking and Coordination Group) meetings run by EHDC and the Police and undertaken Prevent training to report any suspicious behaviour.  Some people may refrain from reporting information to the police in fear of being accused of discrimination.  Moreover without increasing local policing and intelligence any response will be too slow.

It is disturbing that no action has been taken when JAC Party supporters have reported other serious matters such as intimidation in planning applications, money laundering and abuse of vulnerable adults and children.  Even when given clear evidence the police have too often done nothing seemingly due to unwillingness to offend the perpetrators.

I will continue to argue for increased local police resources.  The JAC Party will always help victims and hope the police will listen and act quickly, as sadly did not happen in Manchester.

For many years Susan and the JAC Party have argued for incresed LOCAL police resources particularly to ensure LOCAL intelligence of criminals and terrorists.  Now at last the Government may be listening but it has taken the terrible events of Manchester and London Bridge to wake them up.  And the JAC Party still doubts if the Government will return to LOCAL policing.  Which is why you should express your concern by voting for Susan on 8 June.

.This is Susan's closing statement for the Alton hustings which she did not get the chance to make because the Labour candidate had to leave to catch a train back to Loughborough.

Thank you for listening to me tonight.

I am standing in this election because I care about local issues and the main parties just do not seem to listen.

The English legal system is the best that money can buy.  This now seems to apply to healthcare, education and pensions which are only available to those who can afford to pay.

I am strongly opposed to tuition fees at all levels of education.  They could be paid by cuts elsewhere and taxes from the multinationals hiding in their tax havens.

I have always believed in fairness, transparency and accountability in all aspects of public life.  I am committed to ensuring that this happens in East Hampshire.

Countrywide the Conservatives will probably win this election.  I realise I am probably the “None of the Above” candidate.

I give you the chance to show that you share my passion for justice and equal opportunities in this constituency.

If you are dissatisfied with the main parties please vote for me.

Thank you.
29 April 2017
​The JAC Party is now expecting to field a candidate in the by-election caused by resignations on Alresford Town Council.  Meanwhile the Party is still considering its strategy for the General Election and hopes to make an announcement within the next 48 hours.
01 April 2017 - The JAC Party will be fielding at least 3 candidates in the forthcoming Hampshire County Council elections on 4 May 2017.  Further details will be posted when nominations close on Tuesday 4 April at 4:00pm 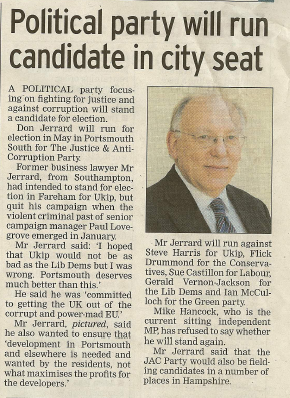 Portsmouth's newspaper, The News, announces that Don Jerrard is running for election in May for Portsmouth South. Don and the Justice & Anti-Corruption Party primarily fight for justice and against corruption. All votes for the Justice & Anti-Corruption Party will send a clear message to the main political parties, and in Portsmouth, independent candidates also, that corruption will not be tolerated by the electorate. Neither by their MP's, locally or nationally, council members, the police, or any other members of the establishment who wish to abuse their power.

Don Jerrard, co-founder of the JAC Party stood in the selection process for the Prospective Parliamentary Candidate for UKIP in Tonbridge and Malling last Saturday.  He was astonished to find that the Conservative PPC was none other than Tom Tugendhat, the son of Sir Michael Tugendhat, the High Court Judge who retired on 3 June 2014.  This was astonishing because on 20 May 2014 Mr Justice Tugendhat made a costs order against Don Jerrard when he was revealing matters of potential embarassment to the Conservative Party.  Sir Michael Tugendhat did not declare his obvious conflict of interest.  Even worse it turns out that Sir Michael's brother is none other than Lord Tugendhat, a Tory peer and erstwhile MP, and later European Commissioner.  Mr Justice Tugendhat did not declare this either.  The JAC Party will be investigating exactly what was going on, and seeing if such an occurrence has ever happened before.
20 February 2011
The Justice & Anti-Corruption Party declares its support for Mr Les Cummings

The Justice & Anti-Corruption Party (JAC Party) will be giving its full support to its co-founder, Mr Les Cummings, at the trial of Mr Cummings under section 106 of the Representation of the People Act commencing Monday 21st February 2011 in Southampton.  This follows a complaint by Mr Michael Hancock, MP for Portsmouth South, that Mr Cummings made comments about Mr Hancock during the 2010 General Election campaign which he knew, or believed, to be untrue.

The Justice & Anti-Corruption Party remains determined to fulfil its mission to expose matters of public concern where the elected members of Parliament and Local Councils have abused their positions of authority and trust.  The Justice & Anti-Corruption Party has still received no reply from Nick Clegg, now Deputy Prime Minister, to its request for an investigation into the appropriateness of payments made to Mr Hancock’s wife and daughter as his research assistants and as local councillors.  These concerns are documented on the Portsmouth page of the JAC Party website at www.jacparty.org.uk

The Justice & Anti-Corruption Party will be fielding candidates in the forthcoming local council elections in May 2011 in Portsmouth and East Hampshire.  In anticipation of the elections, the party announced on Saturday 19th February 2011 that Mr Don Jerrard will be leader of the party during the election campaign, Mr Les Cummings will be Deputy Leader and the treasurer will act as official spokesperson for the Party until further notice.
30 March 2010
The Justice & Anti-Corruption Party

Don Jerrard and Les Cummings are proud to announce the launch of The Justice & Anti Corruption Party.

Known as JAC, the Party will expose injustice and corruption involving MPs and local Councils, and bring it to the attention of the media. It will do this by publishing the facts of what has been happening on its websites, and letting the public decide what is dishonest or corrupt. Eventually, the public will realise what is going on, and hopefully bring the dishonest politicians and Council officers to account for their past misdeeds.

Les Cummings is a survivor of child abuse and is the author of the book ‘Forgotten’. Les lives in Fratton Portsmouth and has fought against injustice for many years. Recently Les has concentrated on exposing abuses of power by Portsmouth City Council, and the politically motivated Hampshire police force.

Don Jerrard is a retired solicitor who helps the victims of abuse of power by local councils. Don lives in Greatham near Petersfield, and has been investigating and exposing corruption in East Hampshire District Council and other local Councils since 2002.

The general public are, by now, tired of hearing about the greed of MPs and local councillors, and the decades of abusive expenses claims and underhand payments for doing their jobs. Simply put, it’s way past time to expose and vote out these corrupt and dishonest politicians who have had their day. It’s time for new blood and new ideas, ideas that exclude the money grabbing politicians who have been lining their pockets with the hard-earned money of the tax paying public for far too long.

It is said that power corrupts, and absolute power corrupts absolutely. This happens regardless of who is in power. In Portsmouth South it has been the Liberal Democrats; in East Hampshire, it has been the Conservatives. In other places it has been Labour. JAC does not seek power – the Party seeks only to put the integrity back into politics for the voting public who deserve better than the current greedy MPs and councillors that we have suffered from for too many years.